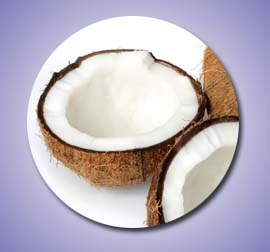 Coconut oil is also good for the immune system. It strengthens the immune system because it contains antimicrobial lipids, lauric acid, capric acid and caprylic acid which have antifungal, antibacterial and antiviral properties. The human body converts lauric acid into monolaurin which research has supported as an effective way to deal with viruses and bacteria that cause diseases like herpes, influenza, cytomegalovirus, and even HIV. Coconut oil helps in fighting harmful bacteria like listeria monocytogenes and helicobacter pylori, and harmful protozoa such as giardia lamblia.

How is lauric acid used by our body?

The human body converts lauric acid into monolaurin, which is supposedly helpful in dealing with viruses and bacteria that cause diseases such as herpes, influenza, cytomegalovirus, and even HIV. It also helps in fighting harmful bacteria such as listeriamonocytogenes and helicobacterpylori, and harmful protozoa such asgiardia lamblia. As a result of these various health benefits of coconut oil, although its exact mechanism of action was unknown, it has been extensively used in Ayurveda, the traditional Indian medicinal system. The Coconut Research Center has compiled a list of potential benefits of coconut oil in both traditional and modern medicine.

Lauric acid was first found in palm oil by Prof. Dr John J Kabara, from the Department of Chemistry and Pharmacology, Michigan State University, America in the 1960s. The benefits of lauric acid, among others, can kill various types of microbial origin cell membrane fatty acids (lipid coated Microorganism). Nature of lauric acid to dissolve the lipid membrane of the virus so that it will interfere with viral immunity, this will create a virus inactivation.