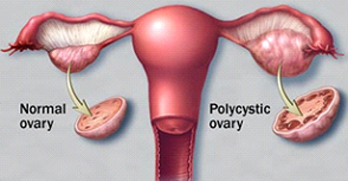 PCOS is Polycystic Ovary Syndrome, also known as Stein-Leventhal Syndrome, and is one of the most common hormonal endocrine disorders in women. PCOS has been recognized and diagnosed for seventy-five years. There are many signs and symptoms that a woman may experience. Since PCOS cannot be diagnosed with one test alone and symptoms vary from woman to woman, PCOS has been known as the “Silent Killer”. Early diagnosis of PCOS is important as it has been linked to an increased risk for developing several medical risks including insulin resistance, type 2 diabetes, high cholesterol, high blood pressure, and heart disease. PCOS presents itself as many different types. College going student Miss.N aged 19 years presented with amenorrhoea (no menses) since 3 months. She brought USG (Ultra Sono Graphy) report with her which diagnosed her to have PCOS. Five – Six months of continuous medication with PCOS Homeopathic protocol. Not only did her menses come back regularly, but also her USG report showed tremendous improvement & cure of PCOS.